An Apple a Day – Apples Confirmed to Help Prolong Life

An apple a day could keep the undertaker away. Scientists have linked apples with a longer life – at least in flies. 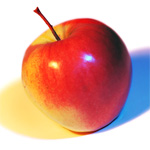 An Apple a Day – confirmed to prolong life

Fruit flies, which share many genes with humans despite their tiny size, are used in hundreds of research projects each year and are accepted as stand-ins for humans in tests.

In this study, fruit flies were either fed normally or had an apple extract added.

The results were that those fed normally lived an average of 50 days, whereas those whose food was supplemented with apple lived an extra 5 days, that’s an additional10%. An extra 10% for a human could mean perhaps an extra 8 years.

Not only did the flies given the apple extract live ten per cent longer, they also found it easier to walk, climb and move about as they aged. The apple extract also cut levels of various bio-chemicals found in older fruit flies and linked to age-related deterioration.

The researchers, from the Chinese University of Hong Kong, believe that the antioxidants in the extract mopped up free radicals – dangerous chemicals blamed for a host of ills, including ageing.

A spokesman for the American Chemical Society said: ‘The results, obtained with fruit flies bolster similar findings on apple antioxidants in other animal tests.’

In another study, researchers who quizzed thousands of women about their diets found that those who regularly ate apples were 20 per cent less likely to suffer heart attacks and strokes.

So, this is yet another study that shows the benefits of eating fruit.

← Virtual Health Club’s Nick Mitchell is Coach to Audi Half Marathon Team
Diabetes Can Reduce Your Life by 6 Years →
Logging In...

Want to be Lean, Sculpted and Fit? No Problem!

This Super-Simple Tip Means You Never Have to Diet Again

How to Reach for the Stars with SMART Goals

How to Reach Results Faster

How to Become the New You