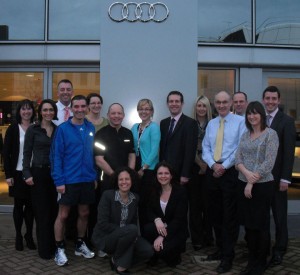 A team of over 40 people from Audi UK are preparing to take part in the 2011 Milton Keynes Half-Marathon. Many of the runners have never run before and the half-marathon presents a real personal challenge.

Virtual Health Club’s Nick Mitchell has agreed to be their coach for the event, and has set out a training schedule and will be working with them right up until race-day.

The Milton Keynes Half-Marathon is taking place on Sunday 13 March 2011 and Nick will be there to cheer on the Audi runners, and to run the half-marathon with them.

Want to be Lean, Sculpted and Fit? No Problem!

This Super-Simple Tip Means You Never Have to Diet Again

How to Reach for the Stars with SMART Goals

How to Reach Results Faster

How to Become the New You